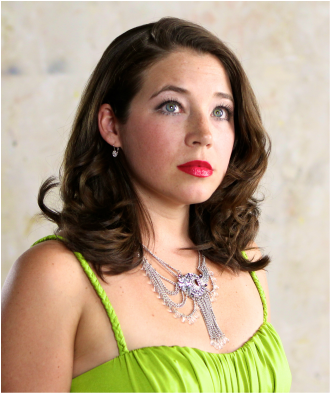 Tara Stafford-Spyres is a native of Rogersville, MO and received her BM from Drury University and MM from the Peabody Conservatory of Johns Hopkins University. She has sung Opera and Recitals throughout North America and Europe with the Festival Lanaudiere in Montreal, Canada, Bad Urach Festival in Germany, Rossini festival in Wildbad,Germany, in Pesaro, Italy, Vienna, Austria, the Boyne Music Festival in Ireland, the Dartington International Festival in England, with the Moscow Chamber Orchestra in both Moscow and St. Petersburg, Russia, the Utah Symphony Orchestra, Asheville Symphony, Asheville Lyric Opera, Springfield Symphony and the Fairbanks Summer Arts Festival.

In December of 2021 she was a guest artist in the Les Volques festival in Nimes, France where she will be returning as a guest artist this coming December as well. In March of 2022 she will be performing the role of Nedda in the Ozarks Lyric Opera production of Pagliacci. Also in 2022, Tara will be performing in a Bel Canto gala with Conductor Jeremie Rhorer and orchestra le Cercle de l'Harmonie at the Grand Theatre de Provence in Aix en Provence, France.

Tara has performed many roles with the Springfield Regional Opera including Gilda in Rigoletto, Mimi in La Bohème, Violetta in La Traviata, Norina in Don Pasquale and The Queen of the Night in Mozart’s Magic Flute. Other roles she has performed include Fiordiligi, in Cosi fan Tutte, Laurie in The Tenderland, Cunegunde in Candide, Mrs. Nordstrom in A Little Night Music, Madeline/Isabelle in The Face On the Barroom Floor, Della in David Conte’s The Gift of the Magi, Jenny in Robert Ward’s Roman Fever and Beatrice in the world premiere of Kevin Clark's chamber opera, Some Ado. Her performance of the role of Jemmy, in the first ever uncut recording of Rossini's Guillaume Tell, is available on the NAXOS label.

In addition to her Operatic career, she has been involved in numerous productions ranging from Oratorio, Chamber Ensembles, Concerts, to Musicals.